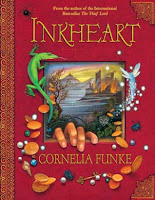 I only vaguely remember the circumstances around which I read Inkheart as a young adult. More clearly, I remembered the premise. I honestly think the book might have suffered a bit for it; it takes some time for things to build up, and when you know what's going to happen, it just feels slow. But Inkheart is still a cute book, even if it's not the best I've ever read. What really won me over was that this was a young adult book where the adults aren't useless.
It's one of those books that celebrates reading and books, and while I enjoyed that, in parts it felt overdone. There were some strange bits, where I honestly didn't think things were going in a way that made sense or that people weren't examining their actions and possibilities. But sometimes, things were seriously addressed.

There's a point where one would consider calling the police. Instead of just having book fuzz go through their heads and make them forget that's a thing people do when someone's been kidnapped, there's an actual, concrete reason given that they shouldn't go to the police.

The writing is decent, if not wonderful. What is wonderful are the quotes from other books that start off each chapter. (WARNING: the audiobook version my partner is listening to does not contain these quotes. If you're going to listen to the audiobook, consider pairing it with the written version, simply for these quotes.)

Like I said, though, what I really appreciated in this re-read was seeing a young adult book where the adults aren't tripping over their own feet. Which makes sense, I guess: the protag might be a child, but she lives in a world of adults. All of the characters save her and one other are adults. As far as we can tell, she's never had any other friends than her father and her books.

So basically, if all the adults had a case of the stupid, well... the protag would have lost.

I love Dustfinger, but I think that's because he's really the only character that felt deep. Everyone else was either clearly built to be a bit shallow or just wanted to approximate depth. Dustfinger actually felt like a well-built character. And he's just awesome, so there.

Things that are probably true: I will read the next book, Inkspell, and possibly watch the movie.
Posted by Unknown at 12:00 AM