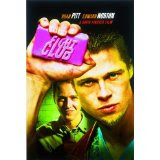 I actually found that knowing the twist to Fight Club wasn't as awful in the movie version. In fact, the movie was good enough that if it hadn't been censored and had a weird ending change, it would have been four stars.

Why is it so common to change the end of books when they get turned into movies? The end scene was pretty awesome, but I didn't find it any more compelling than the book's. Maybe it's for people who've already read the book? But they're expecting the book, turned movie. (Or rather, book turned movie poorly, but hey, that didn't happen here!)

But this probably is one of the most faithful renditions of anything I've ever seen. The tone and ambiance of the book manage to get translated, which I couldn't believe was possible. The entire feel of the book manages to be preserved.

However, some things aren't. Besides the ending. Chuch Palahniuk did a lot of research into the recipes in Fight Club and in the movie, it seems like they edited them. Can't put that in a movie, I guess? But it's okay if it's a book? And it's not like someone couldn't find it anyway?

Basically, censorship for censorship's sake. If someone wants to learn how to make nitroglycerin, they will.
Posted by Unknown at 12:00 AM