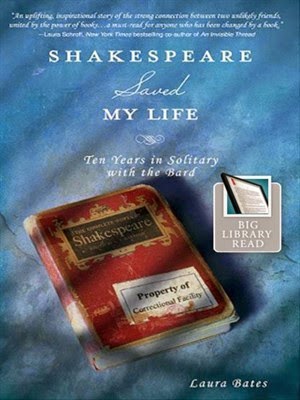 Memoirs should be allowed to be a bit self-absorbed, but in this case, it feels kind of inappropriate. Especially considering it feels like Laura Bates didn't actualize a lot of what she was seeing. However, it's impossible to say that she didn't have a very good impact on some folks.

Overdrive is having a global eBook book club thing. So for a month, everyone can check out a copy of Shakespeare Saved My Life and there are unlimited copies. I needed to read a memoir anyway, so I figured this was a good way to go about it. Especially as I grew up with a Shakespeare scholar. It looked kind of interesting.

And it was. There was a lot of good that can be gleaned from this book. One of my favorite quotes, frex:


I quickly learned, however, that a university education is not a prerequisite to reading Shakespeare. After all, his original audience was not college-educated. Neither was he.

Sometimes, I'm kind of annoyed about the mysticism of Shakespeare being the end-all-be-all of literature. However, there's something to be said about the universality of the Bard, especially with the themes he works with.

Laura Bates started off her supermax students with Richard the Third, wanting to see how they could relate to his own imprisonment. It quickly became a whirlwind through Macbeth and Hamlet and she began reaching out to youth. And it's clear she did a lot of good.

But at the same time, I kept getting this weird sinking feeling as I read it. You'd hear her recount the horrors of what a prison was like, but then it was like she'd accepted this. She seemed to feel like the prisoners needed to earn being treated humanely by behaving -- behaving being a skill they seemed to pick up when learning Shakespeare.

She even states that she's not a prison reformist, but then goes on to talk about the dangers of supermax and solitary confinement. She'll explain why it's so important that prisoners have education available to them, but then couch it in terms of reducing the number of victims once they've left.

In some ways, I think her politics and mine just clash a bit, and it kept getting under my skin. But what frustrated me the most, I think, was her continual whining about her attempts to get tenure. She kept trying to make it relate to the story, but it never did for me. (We also never find out if she actually gets tenure.) And while I know that it's hard to be working in academia with that 6 year threshold sitting over your head as an assistant professor, especially when you're working a renowned program that's actually changing lives, it simply came across as whiny. There were bigger things going on.

I also felt frustrated by the fact that the story covered more about her one major success case, rather than talk about the program in general. And I can kind of understand her wanting to tell his story. Shakespeare literally saved his life and turned it around. She seems to have built a stronger connection with this student more than any other.

On the other hand, considering the number of folks she's worked with, it felt like putting the best pony up for the show.

It's not that I'm reading in bad faith. I honestly think Laura Bates is doing good, and doing good in good faith. But at the same time, I can't imagine coming out of the experiences she's gone through and coming to the conclusions she seems to have come to. I think Shakespeare is wonderful for convicts.

But I don't think it's the end-all be all answer to the inhumanity of the United States' prison system.

There's also a lot of tossing about of the word crazy and a lot of stigma thrown at the criminally insane. Actually, it goes beyond stigma. It does that lovely thing where it seems to imply that the mental illness is the cause of the criminal behavior, rather than exacerbating it. Because you have to be crazy to kill someone, yanno?

I might have read a bit too far into it, but it's hard because "crazy" is used so often in the book. (As is "retarded.") And that's how society deals with this. That's what we're taught. Over and over.

So while there's definitely some good stuff in here, overall I was kind of unenthused. It's an easy read, which I appreciate. She's not over-writing for the sake of sounding more academic. At the same time, she doesn't dumb down her story, simply to make it more accessible.
Posted by Unknown at 12:00 AM